By Edward Tabet-Cubero, NM Coalition for the Majority | August 2, 2018

"As a life-long educator and father of four daughters in New Mexico public schools, here is what simultaneously frustrates me and also gives me hope—WE KNOW WHAT WORKS; we just don’t do it!"

"Here is what simultaneously frustrates me and also gives me hope—we know what works; we just don’t do it!"

"Here is what simultaneously frustrates me and also gives me hope—we know what works; we just don’t do it!"

In order to fully grasp the unprecedented opportunity the recent decision in the Yazzie/Martinez vs the State of New Mexico education lawsuit offers New Mexicans to reset the trajectory of our state for generations to come, it is essential that families, educators, advocates and policymakers develop a shared understanding of exactly what was decided and why. As a community, we must not let the court’s landmark decision become politicized and reduced down to an overly-simplistic debate about dollars and cents.

After years of the same reports ranking New Mexico’s education system at the bottom, with dismal results for all students, and unfathomable gaps in achievement for Native American students, English language learners, economically disadvantaged students, and students with a learning disability, dozens of families said “ya basta!” (“enough already!”) These families and their respective attorney teams from the New Mexico Center on Law and Poverty and the Mexican American Legal Defense and Education Fund took the stand that it doesn’t have to be this way, acknowledging that our New Mexican children possess just as much potential as their peers across the country. Our teachers are just as capable as any teachers anywhere. Our families value education and want the absolute best future possible for our children. However, the State has starved our public education system, not just of financial resources, but of the programs and supports our educators and children need to realize their full potential.

The primary argument in the plaintiffs’ complaint was that the State has failed to meet its constitutional obligation to provide these specific “at-risk” students “a uniform system of free public schools sufficient for the education and open to all children of school age in the state. When the case was announced, it was quickly dubbed a “sufficiency” or “adequacy” case, drawing comparisons to dozens of other school funding cases across the country. However, like most things in New Mexico, this case is actually quite unique. And it should be unique. Our student demographics are simply different. Seventy-six percent of children in New Mexico are culturally and/or linguistically diverse and over 70 percent of our children are identified as economically disadvantaged. With those distinct demographics come very distinct learning needs. Far beyond the basic funding arguments they made, what the plaintiffs in this case did was put New Mexico’s entire K-12 educational system on trial, arguing that the State has failed to provide our most at-risk students with all of the programs and supports they need in order to succeed. And the state district court judge agreed in her judgement, declaring:

“1. The Defendants have violated the Education Clause, the Equal Protection Clause, and the Due Process Clause of the New Mexico Constitution.

The emphasis in this case on “programs and services necessary” ahead of “funding” is no accident. We must not allow this landmark decision to be reduced to a simple math problem. Just as our children are not a test score, they are also not a dollar figure.

As a life-long educator and father of four daughters in New Mexico public schools, here is what simultaneously frustrates me and also gives me hope—we know what works; we just don’t do it! Decades of research and practical experience make it abundantly clear that there are multiple programs, supports, and ways of educating children from diverse and impoverished backgrounds that actually help to close the achievement (opportunity) gap. Examples from right here in New Mexico include the call for a bilingual teaching force in our NM Constitution, the nation’s first funded Bilingual/Multicultural Education Act, and the nation’s first Indian and Hispanic Education Acts. The problem is that the NM Public Education Department has failed to effectively support, monitor, and hold local districts accountable for the implementation of these approaches that we know work and are required by statute.

From nationally recognized communities in school initiatives to world-class dual language education programs to comprehensive PreK-12 tribal education collaborations, New Mexico is full of bright spots of education programming that works. The challenge is taking these programs to scale across the entire state, so that they are offered in a constitutionally required “uniform” manner that provides opportunities for all our state’s children and not just some. It is incumbent on all of us to remind our elected officials that we are not going to nickel and dime our way out of 50th. We need to seize the opportunity for a wholescale transformation of our state’s education system in a way that fosters innovative, research-based practices that build on the unique assets that make us New Mexican. 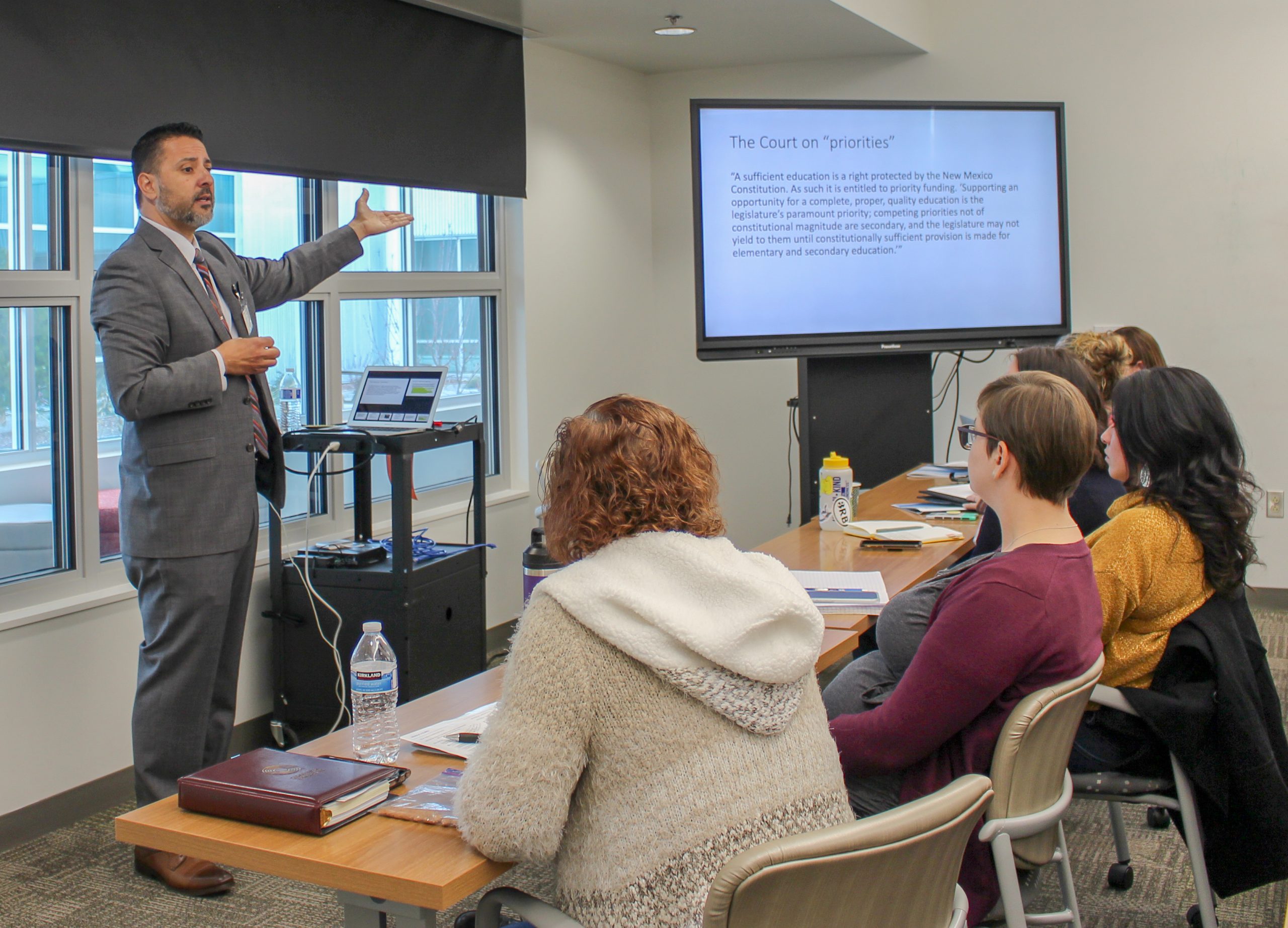 In July of 2018, the court declared New Mexico’s public education system constitutionally insufficient, agreeing with the plaintiff families and school districts that the State has violated the constitutional rights of at-risk students, including Native Americans, Hispanics, English language learners, low-income students, and those with special needs. The State (legislative and executive branches) was given a deadline of April 15, 2019 to come into compliance with the New Mexico Constitution by providing all students a “sufficient” education.

That deadline essentially gave the defendants one legislative session to remedy the findings of the lawsuit. That has not happened.

Funding for specific programs, such as K-5 plus, which adds 25 days to the school year, were fraught with challenges, including a short timeline for roll-out and onerous requirements that prevented many districts from accessing the funds provided. The legislature also increased the funding index for at-risk students, raising it to about 16 percent, but trial testimony clearly indicated that the index should be at least 25 percent. There was a modest increase to pre-K, but thousands of four-year-olds still lack access to high-quality programs.

Finally, this highly politicized process failed to actually focus on the specific student groups represented by the lawsuit; little to no funding was provided for programming specific to their needs. For example, out of a three billion dollar budget, the Indian Education Act fund received a modest increase of three million, bilingual education received seven million, and while three-fourths of New Mexico students are low income, the Community Schools Act only received two million to provide statewide services.

The positive momentum of the new leadership at the Public Education Department is hopeful. But in order for them to provide the oversight and support necessary for districts to meet the needs of the students represented in the lawsuit, the legislature must appropriate sufficient funds in the right places.

Edward Tabet-Cubero is a founding member of the NM Coalition for the Majority, which advocates for equity and quality in the education of linguistically and culturally diverse students in NM. He lives in Santa Fe with his wife who is also an educator, and four daughters who attend NM public schools.