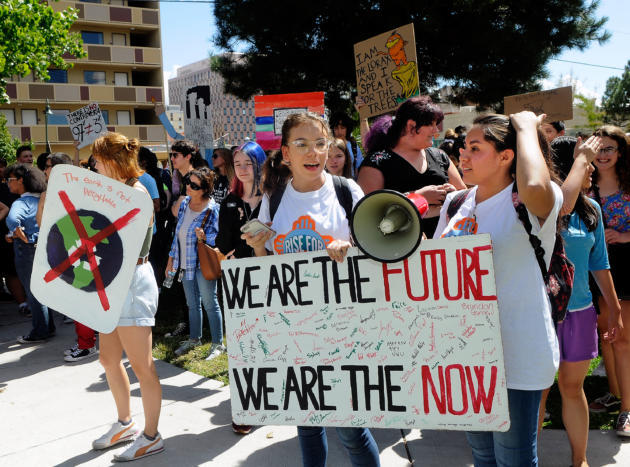 What If Community Organizers Ran Schools?

My thoughts and my ideas are valid—even if my voice shakes, even if I get flushed, and maybe even if tears start to form—I still belong here.

Kateri Zuni from MediaDesk on Vimeo.

What are your thoughts on racism as a social determinant of education?

Racism is a toxic soil where these determinants or seeds grow. If you're not addressing racism where it starts, how are you going to address it when it comes up in policy? How are you going to address it when it shows up in curriculum or health inequities within communities in schools? In a lot of ways, racism is the ultimate social determinant, especially when it comes to education. I have a lot of stories of going to school and learning old, tired, outdated racist stories about how this country was founded. Even learning about New Mexico history, like who my people were, comes from a racist perspective. It’s an unwillingness to understand the truth and tell the truth. That's just one small example and there are just countless other examples of how that comes out in everyday education.

For example, the teacher is someone you want your child to trust and we ask our children to pay attention and listen to the teacher. Yet, when my child was young they learned about Christopher Columbus and I had to undo those lessons. My experience with my own children was full of tricky conversations that I had to navigate.

What do you think will happen when anti-racism stops being trendy and loses its buzzworthiness with white people?

Unfortunately, we will probably see less people being involved and invested in the conversation, especially after 2021, when we have a new administration coming in. People will probably think they can relax now; we don’t have to be so angry. But, we know that that's not actually the case.

But in spaces like ours within community organizations and people who are actively fighting racism, and are actively practicing anti-racism, obviously that question is not going to go away. If anything, it may get a little more detailed and nuanced to look at the ways that racism does exist, even when we're “making progress.” That's the thing about racism, it’s able to hide. It’s hidden in the ways that our systems are built. It’s really hard to prove. It's so easy to write laws so that it doesn't look like it or doesn't sound like it, but you can definitely feel it when it's about you.

How is your work at Generation Justice teaching anti-racism?

In my work at Generation Justice anti-racism and a multiracial environment is literally baked into the mission, and it’s one of the core values that we hold. We put it into our practice and make it a habit every day. If you are in an organization and you look around your zoom meeting and everybody looks the same, then I would ask: “Are you doing the work of being an anti-racist organization?” If you're missing critical voices, like indigenous voices, and you're trying to do work in New Mexico at this point, then there’s something wrong.

If you have an organization that looks like your community, then that's a great first step. We teach young people: “You're the expert in the community that you live in, the street that you live on, and where you grew up.” And we bring their community expertise to policymakers to help make change happen.

How is your work at Generation Justice teaching leadership?

Building the confidence of young people is really important. At Generation Justice, a young person can host a one-hour radio program, which is something that so many adults have never done and they’re only 13 or 14 years old! That kind of confidence can do so much for young people and it can spark so much passion and drive.

We also focus on helping young people lead with compassion. Being a compassionate leader is what gets you to a place where you're actually serving as you're leading. I think there's a difference between being a leader in the traditional sense and being somebody who's in service leads with service. Somebody who leads with service is somebody who is inspiring people and still getting things done with a clear understanding that they're doing it for others, not for themselves. A real leader brings everybody else with them. They also move everybody else forward which is the end goal with the kind of a leader who's grounded in service and grounded in community.

For young women of color, learning that it's okay for you to say what you think and take up space in a room is something I'm still learning now in my thirties. And it sucks to have to remind myself that I belong here, and not be intimidated because my mom wasn't in these rooms at this age, or that my family never went to Ivy League schools. But my thoughts and my ideas are valid—even if my voice shakes, even if I get flushed, and maybe even if tears start to form—I still belong here.

How does racism manifest in a community?

When you're just driving around town, there are a lot of Native faces that you see who are unsheltered and who are in need of services. It’s terrible and it's painful. It's one of the biggest examples of racism because this land is indigenous land, and yet there are unsheltered Native people suffering, while law enforcement, community members, or business owners treat them as though they don't belong there, and need to get out. That's a really painful thing to see and understand. What’s even more painful is I've heard other Native people say, “Oh God, they’re so embarrassing.”

What if community organizers ran schools? How would things be different?

The big thing that I would do is integrate the school into the community and into the learning process. Elders in the community would come and share about the history of the area or their own culture. Students could learn so much in a holistic way about the cultures around them, so that when they learn about Columbus they think of the story of Native people on this land. Bringing in the knowledge that already exists in the community is really, really important. That takes a bigger kind of discussion about what we agree is knowledge or relevant knowledge. We cannot default to intelligence as getting good grades that are based on a curriculum that was given to us by a system based in white supremacy.

If community organizers ran schools, the kids would be giving back. They would get to know their community and work with their community. And there are schools doing service learning, internships, and projects where they are embedded in a community organization and actually do the work. But, I also think that they would be taken care of. They would have somebody who is checking in and saying, “Are you okay? Do you need help?” Or, “Are you feeling down?” They would have those check-ins so that they are able to learn without having to carry the burdens that might also be following them in life, like so many of us have.

For example, at Generation Justice we always find a way to ground the space. So whether it's asking “What are you grateful for today?” Or, “What is something you wish for later at the end of the training?” On Zoom, we found a way to bring in a picture of our altar so that it's always there, and reminding us why it’s important. If that was school, I think it would be a much more enriching way for young people to learn—and also to unlearn so many of the habits and practices that we get from society and from institutions that break us down.

What’s the difference between education and positive youth development?

In education, we say to young people, “I'm the expert and I am teaching you and you're going to fall in line.” Whereas positive youth development really tries to emphasize and create more of a healthy partnership—with boundaries, of course. It's looking at how can I serve this young person in other ways than just improving their grades? What else in their lives needs attention? How else can I be useful to them? This way the path to learning is more holistic, and it offers more respect and regard and honesty to young people than I think education spaces often give them.

What can we learn from working with young people in Native communities?

As an educator, you're not just teaching or mentoring this younger person. It's also for the next young person in their life, whether that be their child, whether that'd be a younger sibling or a peer. Being really mindful of that is important.

Any time you get to work with a young person, or if any time you are trusted by a family to teach their young person, it's an honor. It's a great amount of trust. I'm just a little bit kind of humbled by that idea.

Kateri Zuni is the former Youth Coordinator at Generation Justice, a multiracial project that trains youth to harness the power of community through media, narrative, and critical consciousness.

We Can’t Talk About Racism Without Social Emotional Skills

We Know Capstones Already Work, Why Aren’t We Using Them?

How New Mexico is Working to Decolonize Curriculum