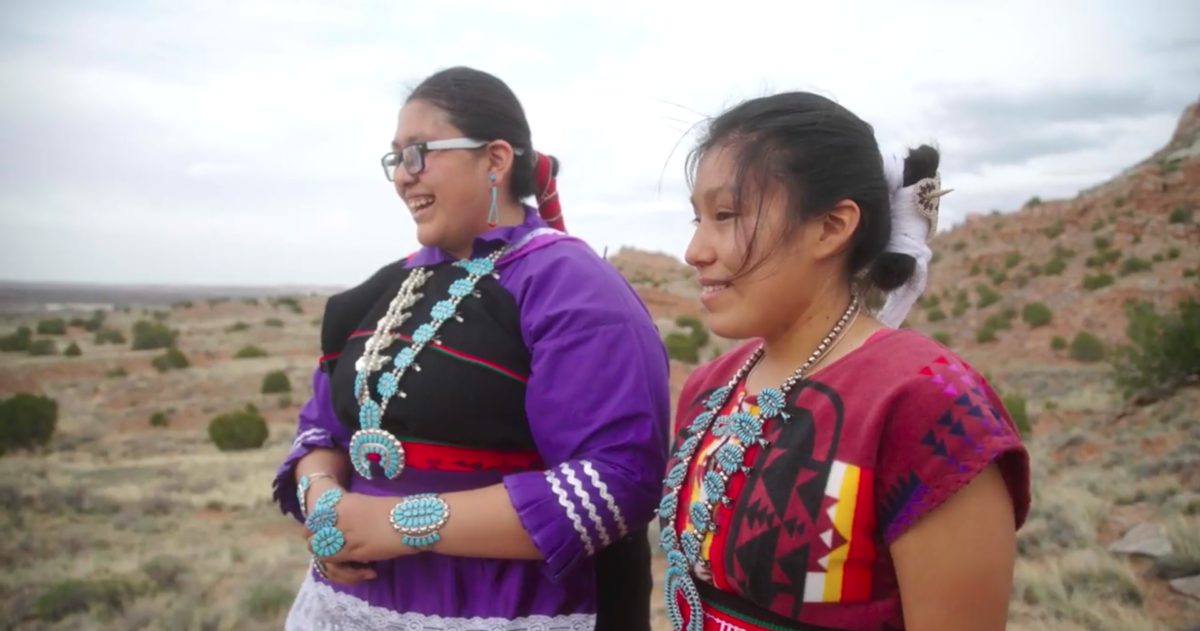 Capstones: A Catalyst for Intergenerational Healing 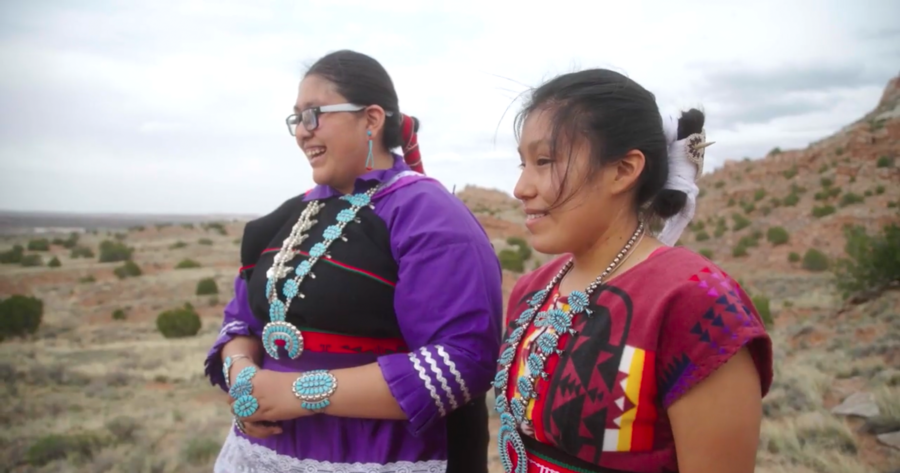 Zuni High School seniors, Chasady Simplicio (left) and Kristyn Eriacho (right)  pose for a photoshoot in traditional dress and jewelry. The 2021-2022 senior capstone class built a curriculum and website to teach other students traditional garment construction so the Zuni artistry and craft would not be lost in future generations. [photo by Michael Lorenzo Lopez]

Today, every tribe across the 574 federally recognized tribes and 200 non-federally recognized tribes are actively confronting intergenerational trauma—what happens when a people have been subjected to trauma over and over without the respite of healing. Without healing, Indigenous people continue to succumb to the ongoing genocide perpetrated against our people since 1492.

So, what do we do to heal? What does that work look like?

As an Indigenous woman who has suffered from the wounds inflicted by intergenerational trauma and grief, building the Zuni High School Dual Credit Capstone Project and seeing its outcomes have played a significant role in my own continued process of healing.

This is ultimately a story of hope and resiliency.

The Seeds of Intergenerational Trauma

Native children still do not see their cultural identity or language of origin reflected in their instruction or their learning environment.

Given that the roots of “Indian education” were derived from prison “experiments” and carried out with the intentional and strategic support of the United States government in tandem with Christian churches, it is not difficult to imagine the subsequent intergenerational trauma we Native people assume at birth and struggle to shoulder for the rest of our lives.

Following the Native American Boarding School era—which had the central objective to strip Native children of their language and culture by ripping them away from their families—public education remained unchanged.

It’s not easy to try to convey what it felt like when I first encountered the following words contained within the Documents of Indian Policy, “The Indian Problem: kill them, or civilize them.”

I was a 38-year-old single mother of three children, paying a mortgage, working five jobs and back in school full-time after a 10 year hiatus. I was also enrolled in the Indian Education Program Development, a grant funded endeavor designed to recruit Natives in higher education to become Indian educators. My courses exposed this country’s history of using “guns, government, and churches” to subdue and tame “hostile” Indians.

It was late at night, and I was leaning up against the wall on my bed reading the Documents of Indian Policy in preparation for the next day’s class discussion when I encountered those words. “What do we do with the Indians? Kill them or civilize them?”

I recall feelings of anger radiating throughout my body and then culminating in deep, wrenching sobs. It felt as though I was grieving for all of the ancestors who had come before me, and who were never allowed to shed tears.

What I didn’t know then is that my reaction was a classic example of unresolved grief and trauma, seeing my own life as a kind of betrayal to those who had suffered so much for so long.

According to the U.S. Department of Health and Human Services Office of Minority Health, suicide was the second leading cause of death for American Indian/Alaska Natives between the ages of 10 and 341, and violent deaths, unintentional injuries, homicide, and suicide account for 75 percent of all mortality in the second decade of life for American Indian/Alaska Natives2.

Reports like these only serve to underscore the reality that as Native people the odds are stacked against us. While this country debates “critical race theory,” and its Declaration of Independence still refers to its Indigenous people as “merciless savages,” our people are dying every day.

Prior to the residential boarding school era, the extended family and the tribal community at large embodied a system of education which taught their children that everything in the natural world is a relative based on the law of reciprocity: what you do to the other, you do to yourself. This education taught our children to respect the laws of kinship seamed together in the threads that interwove tradition with language, culture, and survival. 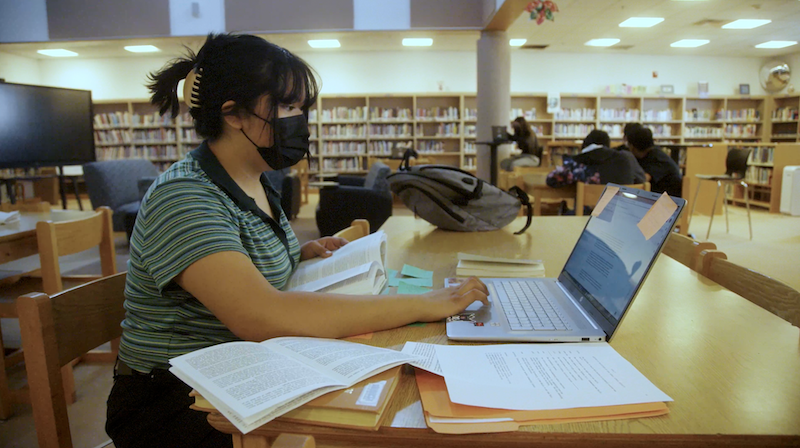 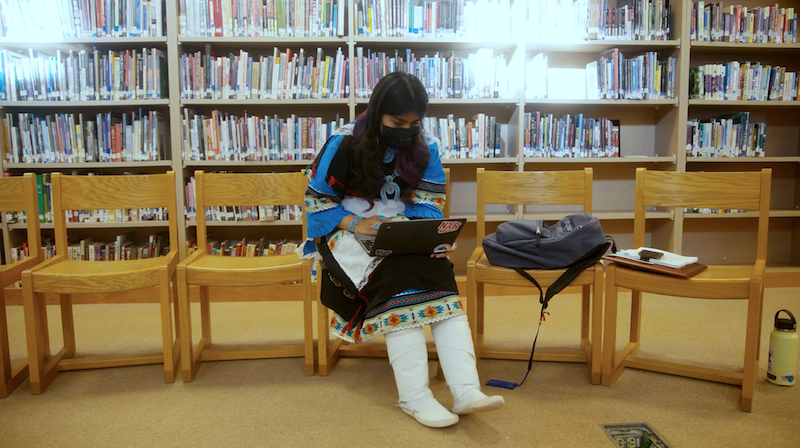 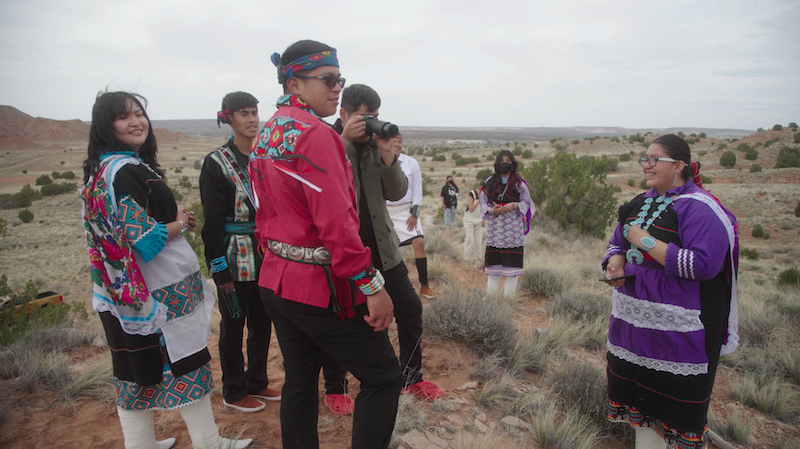 
How Capstones are Healing

I am the only Indigenous core teacher here at Zuni High School and now finishing my ninth year. I am so proud to say my Dual Credit Capstone Project has set the bar for capstone project excellence in the state of New Mexico.

Based on my own history as a mission boarding school survivor, and ever since I became a classroom teacher, it has always been my passion to provide students with the kind of education I wish I had received.

This year’s capstone project centered around Yazzie/Martinez. The student’s problem statement was:“Yazzie/Martinez still has not been implemented in Zuni High School because teachers do not recognize that this is the law.”

While some may argue that the Yazzie/Martinez ruling is not the law itself, we could make a compelling counter-argument that it is indeed the manifestation of New Mexico’s Indian Education Act Mission and Vision. Because of this country’s failure to teach the truth, our young people have suffered in silence for generations. There is a saying, “Our silence has never served us.” Our Zuni High School Graduation Capstone Project embodies Yazzie/Martinez compliance outcomes.

During the end-of-year capstone presentation, Principal Don Sparks said, “If this is the next generation of Zuni leadership, you’re in good hands.”

This is my passion and prayer that each one of my students will go on to pursue the college credentials for the career of their choice, come back to their homelands, and take on leadership roles through their example.

And as a Native educator, I look forward to continuing this journey of reclaiming intergenerational harmony and healing through the conduit of the capstone project.

Stay tuned for part 2 and 3 to learn more about the Zuni Dual Credit Capstone program and how it relates to intergenerational healing.